In reading the parable of the talents in Matthew this week, I’ve asked myself many questions, but specifically, “Am I playing it safe?”

Remember the story: the master was going on a journey and left his money in the care of his servants, according to their abilities.

To one servant he gave five talents, to one he gave two talents and another he gave one talent. The servants who received the five and two talents went ‘at once’ and put the money to work, doubling the number of talents.

But the servant who received one talent dug a hole and hid his master’s money.

Some time later when the master returned to settle his accounts, he was pleased with the first two servants for using what he had left in their charge and growing it. He said to them, “Well done, good and faithful servant! You have been faithful with a few things; I will put you in charge of many things.” 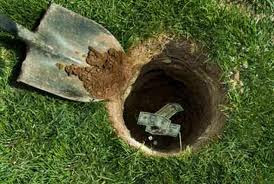 The master, however, was not pleased with the servant who hid the money. By doing so, he had not put to use something that wasn’t his to begin with. Out of fear he put the talent away for safekeeping.

How does this relate to us (me)? God has blessed us with resources to be used for His glory. Some have abilities and some wealth, but none of it belongs to us. God is the owner, and we are the caretakers. When we prove faithful with little, He gives us much.

What are we playing it safe with to avoid obedience to Him?